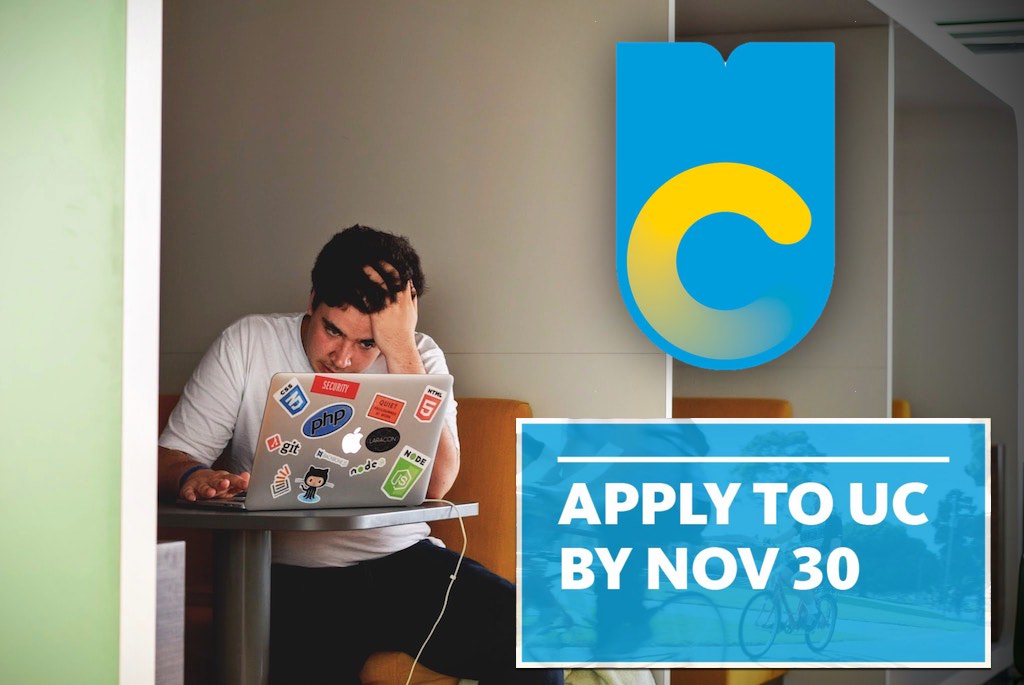 1. Does the UC website actually crash on the deadline?
2. Is the UC application due on or before Nov 30th?
3. Do students who submit earlier have an advantage?

Myth #1: Does the UC Website Actually Crash on the Deadline?

Across the world, teachers, school counselors, and online forums warn that if you wait until the last minute to submit your UC application, the website may crash and you will miss your opportunity to apply. Is this true?

Like every urban legend, this one is based on a tiny kernel of truth. In 2009, the UC website did momentarily crash, but the UC application promptly (and generously) extended the deadline for all applicants. In fact, reviewing the historical record of tweets about "UC Application crashes" reveals a pattern of people warning each other, in every year since 2009, that the website will crash again. Then, they are all shocked when the dreaded repeat crash never comes, year after year. Although 2020 crashed for several hours one day before the deadline, the deadline was generously extended by 4 days (described further below).

In the unlikely occurrence of a crash, your window of opportunity to submit your UC application will not be lost. Not only do the UCs extended the deadline whenever any issue (technical or not) significantly prevents students from submitting their applications on time, but extensions are sometimes given without reason. For instance,  in 2017, high school seniors read this message in the final days leading up to the deadline when they logged into their UC Application:

In this instance, the UC application gave all students an extra day (pushing the traditional Nov. 30th deadline back to Dec 1). To the best of our knowledge, the server never even crashed or momentarily timed out that year. In another instance of the UC's generosity, students affected by wildfires were given an extra 15 days to submit their applications.

An Actual But Temporary Crash in 2020 Led to an Even Bigger Extension:

On Nov. 29th 2020, even though the deadline was still a full day away and applicants were still able to access the UC website three hours after the crash started, the UC immediately extended the undergraduate application deadline from Nov. 30th to December 4th. In addition to the news released linked here, all UC applicants who opened the UC website were greeted with this big, warning message:

"Due to the technical difficulties that many were experiencing on Nov. 29, the deadline for the UC application has been extended to 11:59 pm PST, Friday, Dec. 4."

Whenever there is a disturbance on the UC Application website, the UC responds generously out of an abundance of caution.

This May Also Shock You:

Admissions offices can also be surprisingly flexible and accommodating (within reason) when the problem is on your end. For example, in 2018, a transfer applicant had to call the UC Application Center because she was having computer problems during the week of the deadline. The technical problems prevented her from retrieving essays stored within her laptop. However, the UC Application Center actually told her that she could send her updated essays as additional information. Initially, she had to use her old essays from when she applied as a freshman in order to meet the deadline, but then she was able to send her new essays in later.

Lastly, people don't know that the stated deadline isn't actually the hard deadline. Colleges have secret grace periods that allow for the submission of applications hours after the official deadline has passed. Why? Because despite their strong-faced facade, they get it: they're dealing with teenagers and technology can be unreliable. While we highly advise that you don't play with fire by testing the limit of the grace period, as long as the application website successfully accepts your submission, you are fine and your application will be reviewed. It's only when the application doesn't allow you to submit that you've lost your window.

We once had a student get accepted to an Ivy League university despite submitting her Common Application almost 3 hours after the midnight deadline (Regular Decision). That's a story for another time but, again, we don't suggest testing the limit.

Don't rush your application. Take your time and ensure your application is perfect before you submit. Think like the winning basketball player who hogs and controls possession of the ball as time expires, purposefully draining the clock. Don't be pressured to submit early like the student who below submitted on Nov. 21st.

"Hi, I  just wanted to let you know that I submitted the UC app last night! I forgot to add two of my honors and awards. I called and they can’t add anything or make any changes to the application itself. I’m hoping that doesn’t derail the rest of my application."

Every year, the UC Deadline is 11:59pm on November 30th, regardless of what day of the week Nov. 30th falls on.

However, we hear from students that their friends, teachers, and school counselors interpret this to mean that they should submit on Nov. 29th. That notion is wrong. You can wake up on November 30th and continue working on your UC application all day. As long as you submit it by midnight before you go to sleep, you're on time. Yes, technically, you can submit a little afterward, into the wee hours of Dec. 1st with the secret grace period, but don't play with fire.

If you see an article that says, "the UC deadline is this Friday at 11:59pm PST" check the year it was written. Outdated websites contribute to the confusion.

Myth #3. Does Applying Early to the UCs Give You an Advantage?

Rest assured that applying early to the UCs won’t improve your chance of admittance (at all, regardless of your major). The UCs are very adamant that they don’t review students in a vacuum. Meaning, they wait until Nov. 30th passes because they want to evaluate all students relative to the other applicants and ensure they ultimately admit the strongest students.

By contrast, a that college starts reading and accepting applicants as they come in is practicing “rolling admissions” (i.e. applicants are admitted on a rolling basis). But, the UCs are explicit in that they do not practice rolling admissions. If your application is submitted on November 1st, it will sit in queue, for a long time while your competition can perfect their applications.

Here’s an excerpt from an email I sent a mom recently who claimed that a UC admissions rep told her that some majors start reviewing applications as they come in:

I’ve never heard that before so I just called UCLA to confirm and spoke with one of the admissions officers, Catherine. Catherine confirmed that there is no advantage to applying early at any of the UC campuses and UC applicants who submit early don’t get an advantage nor do they get read sooner.

There is also no exception to this policy by major. Catherine explained that because UCLA and all other UC campuses evaluate all applicants from one school against other candidates from the same school, they wait until the deadline has passed so that they can review all of the applicants from a student’s school in context. Otherwise, if they started to review students as their applications roll in, then they wouldn’t have a way of knowing if they were truly admitting the strongest applicants from that school.”

Hence, the best strategy is submitting as close to Nov. 30th as you feel comfortable with so that you can use the time to develop the best application you can muster.

The Truth About Applying Early to College This post covers the four types of early application options a college...
Skip to content