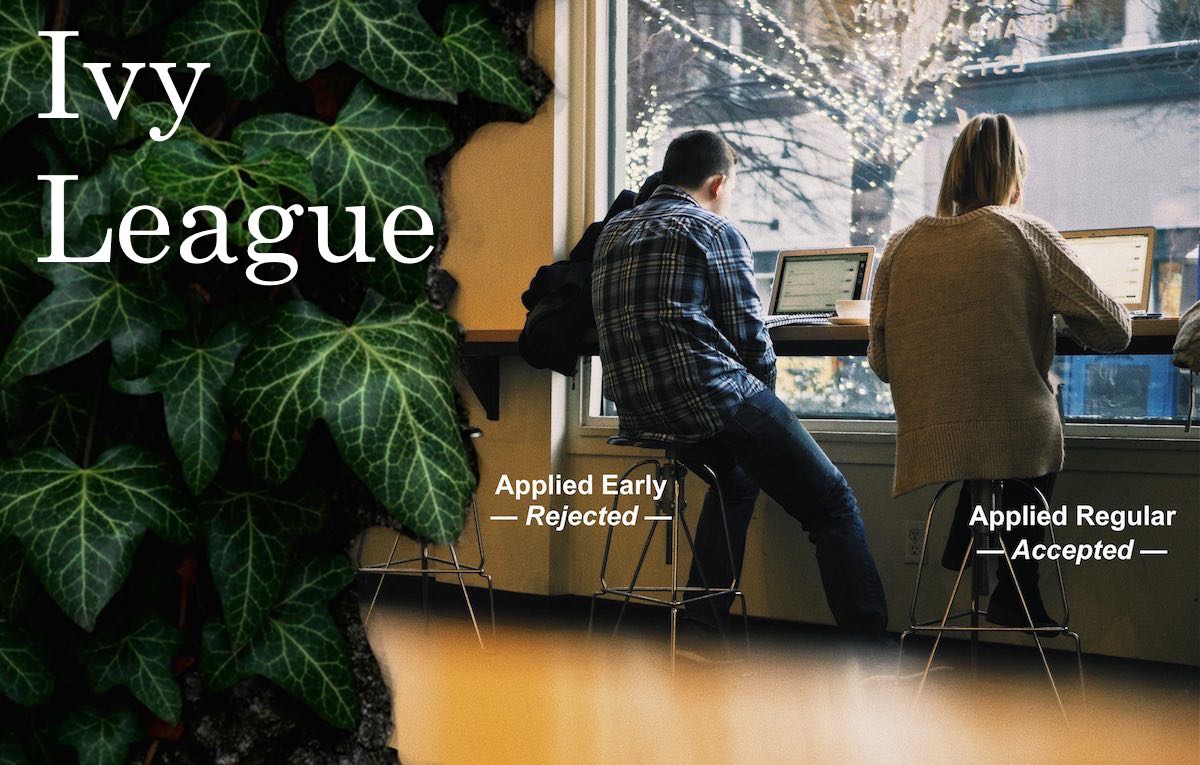 The Truth About Applying Early to College

How much does applying early help you? It depends. The key question to ask is, "Is the early admissions rate actually favorable for regular students who are not being recruited by the college?"

The myth busting reasons below will explain why applying to most Ivy League and top 15 ranked colleges early does not give your application the significant boost that most people believe it will. Scrutinizing official university data reveals that the massive, double-digit differences that people perceive between the early and regular acceptance rates actually stem from misconstrued data points. Let's start by demystifying Early Decision statistics.

1. How Big Is the Real Early Decision (ED) Boost?

Early Decision is a binding agreement: You agree to apply to only one college early and if accepted you must enroll. Ivy League and NCAA Division III (sports division) colleges are prohibited from offering scholarships to athletes, so they recruit all of their student athletes through the Early Decision process. Since recruited athletes are a significant amount of the early applicants who get accepted, the discrepancy you see between the Early vs. Regular Decision admit rates doesn’t accurately reflect your chances of being admitted Early Decision if you aren't one of these athletes. So, how much does the inclusion of recruited athletes skew the Early Decision acceptance rate? Let’s find out:

Note: The concept of this example is applicable to many highly selective colleges.

At Brown, an Ivy League university, a whopping 40.4% of the incoming class was admitted in Early Decision for the class of 2021. The acceptance rate cited for the Early Decision applicants was 21.9%, tremendously better than the 6.9% Regular Decision acceptance rate. Statistics like these are cited profusely in the media, and when most people see this difference in the admit rates, they feel it’s a no brainer that applying early triples one's odds of acceptance. However, Brown admissions officers caution that applying early won’t affect your chances:

Brown’s athletic website states that a significant number of spots, "over 200", in each year’s class are reserved for “recruited varsity athletes.” For the class of 2021, these 200 recruited athletes accounted for 28.7% of Brown’s Early Decision acceptance offers. If you play sports but a scout from the athletic department hasn't initiated and maintained regular contact with you, then you're not being recruited. You'd be a normal applicant. This brings us to myth #1:

Myth: "If you are a normal applicant with a lower GPA or test score, your chances are better by applying Early Decision."

Truth: Because athletes account for about a third of the early acceptances, their lower academic profiles pull the average GPA and test scores of early admits down, making them appear low. However, Brown’s Office of Admissions states that the non-recruited students they accept early have GPAs or test scores equal to or better than the students admitted from the Regular Decision pool. Brown seeks to ensure its early admits are truly amazing. Another Brown admissions officer was quoted saying, “We admit Early Decision applicants only when we are confident that we would offer them admission as a Regular Decision applicant.”

Lesson: If a college isn’t recruiting you and you have lower grades, your chances of being admitted are actually better if you apply Regular Decision, giving yourself more time to raise your GPA and/or standardized test score.

Official charts like the one below from Boston University mislead high school counselors, who in turn, mislead you about your chances of admittance when applying early. The chart is misleading because, when College Zoom visited Boston University in late 2017, a BU admissions director confirmed that the lower grades and test scores of athletic recruits are not removed from their annual information report for counselors shown here. 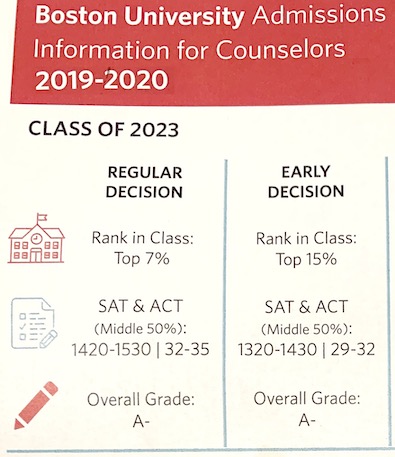 Technically, an A- GPA is anything between 3.4 to 3.7. However, non-recruited students with a 3.4 GPA are almost certain to be rejected by BU, barring extenuating circumstances. Meanwhile, a 3.7 GPA would be deemed acceptably competitive. Here, however, the drastic difference between a 3.4 and 3.7 GPA are masked by the title "A-".

SAT Score: Athletes tend to score at least 200 points lower on the SAT than non-athletes (New York Times). Yet, they comprise about 30% of the early admits. See how athletes skew the middle 50% range?

Lesson: If your school counselor tells you that your chances are better if you apply early and proves it with a chart like this, don't be misled. As non-recruited student, if your academic profile is not on par with the numbers hit by students who are accepted regular, there's no benefit to you by applying early. Applying regular, using the time to get your grades and test score up, is better for your chances.

Why the (Higher) Early Decision Acceptance Rate Is Misleading

Based on statistics from comparable Ivy League colleges, about 8.7% of the early decision offers may be reserved for low-income students recruited through special scholarship programs like QuestBridge or the Sidney E. Frank scholarship fund. Another 1% of the early class may be reserved for musical recruits (i.e. orchestra and band) and 1.8% of early applicants may have withdrawn or failed to complete the submission of required documents. These additional students drop the early acceptance rate for non-recruited students even lower to a final resting spot of about 14.3%.

In summary, Brown's published Early Decision acceptance for the class of 2021 was 21.9%, but for non-recruits it was actually closer to 14.3%.

Only About 30 Non-Recruits Got the ED Boost

Though the adjusted Early Decision admit rate of 14.3% still seems more favorable than the 6.9% Regular Decision admit rate, they are separated by only 7.3%. Because the number of non-recruited admits who actually get accepted in Early Decision is so small (414 students), that 7.3% difference equates to just 30 non-recruited students who got the "early decision" boost and got in. For context, a data table that used to be on Brown's Admissions Facts webpage (but was recently removed as of September 2018) showed that Brown's 10 most recent admissions classes have a mean size of 2,785 admits and a standard deviation of 108 admits from year to year. In simple language, that means the overall number of students admitted into each class naturally fluctuates, at times, to a much greater degree than 30 students, giving the Early Decision boost no significance. Now, Brown's official stance that applying early doesn't increase your odds of success begins to make sense.

However, if the official Early Decision acceptance rate was actually 21.9% for non-recruits, then the advantage of applying early as a non-recruit would be phenomenally statistically significant to a magnitude of 6 times the standard deviation of a normal entering class. That would indeed be an astonishing advantage for non-recruits. But, now you know that's a fake statistic.

"Keep in mind that the published higher percentage of applicants accepted early is somewhat misleading because it includes recruited Division 1 athletes, whose credentials have been reviewed in advance. With recruited athletes removed from the Early Decision numbers, the statistical advantage isn’t as large."

But, what about Brown's claim that 40.4% of the class was filled in early decision?

Misinterpreting the "Percentage of the Class Filled in Early Admission"

Brown’s class, by definition, only counts students who were both accepted and enrolled—it ignores successfully admitted students who chose to enroll elsewhere.

Put into perspective, the 40.4% figure equals all 695 early admits (including recruits) divided by the 1,719 total number of admitted students who enrolled. It ignores the larger total of 2,722 students who got acceptance letters and could have chosen to enroll. If 100% of those 2,722 students chose to matriculate to Brown, then only 25.5% of the class would've actually been filled by Early Decision admits—not 40.4%. But, even that percentage still includes recruited admits.

Most Early Applicants Got Deferred

Brown's official statistic was "60% of Early Decision applicants were deferred" to Regular Decision, but that still misleads us by including recruited athletes in the denominator. Those students shouldn't be counted because they have no chance of being rejected or deferred. A more accurate, adjusted statistic is the following. Within the Early Decision pool of non-recruited applicants:

Applicants who have lower academic and standardized test scores are often the most hopeful that applying early will help their chances, but they are the most likely to be deferred. Even if the student is a great fit, universities will defer the student until after the fall semester and December SAT/ACT test date opportunities have passed. Getting deferred at this point is perilous to your chances because once deferred, you may not make changes to your submitted application. So, as your application sits in the deferred pile, tens of thousands of your competitors are getting an two additional months to boost their GPA, standardized test scores, co-curricular achievements, and/or develop more compelling personal statements that further stack the Regular Decision outcomes against you.

Duke, Tulane University, University of North Carolina – Chapel Hill, Northeastern University, University of Michigan—Ann Arbor but only for UMichigan's Ross School of Business -- are rare because they are both very selective (i.e. they have Regular Decision acceptance rates under 30%) and their early applicants do get a helpful boost by applying early. However, a recent article by The Atlantic has made the argument that Tulane has artificially lowered its acceptance rate (i.e. ballooned its applicant pool with applications from non-competitive students) by sending out free, pre-filled out, college applications to Louisiana students (its home state) and across the country. This would effectively mean that the early boost, and Tulane's actual selectivity, is not what it seems.

SMU is another very popular university on the rise that we get many questions about. Using the university's official Common Data Set data, we calculated that SMU's 2018 Early Decision acceptance rate for non-recruited students was approximately 43%. Meanwhile, it’s acceptance rate for Regular Decision students was even higher at 51%.  This runs contrary to the stories we frequently hear from parents about high school counselors and even SMU's admissions office encouraging ED to boost a student's chances.

Unlike Early Decision, Early Action offers are not-binding. So, colleges still need to admit at least two students to fill each open spot, even in the early round. Therefore, applying Early Action won't give you significantly better odds than applying regular—you just find out sooner. MIT offers Early Action and also explicitly states: "There isn't an advantage to applying early."

Some colleges — such as Stanford, Harvard, Princeton, and Yale — practice Restrictive Early Action (also known as Single-Choice Early Action). In Restrictive Early Action (REA), applicants are allowed to apply to only one private college under Early Action. However, any subsequent acceptance offer is not binding. However, many admissions professionals consider REA programs to be de facto Early Decision programs because the immense pull of the highly prestigious colleges that employ REA programs is so great that the overwhelming majority of admitted students attend anyways.

Harvard correctly says, "Harvard does not offer an advantage to students who apply early" Although Harvard's class of 2021 had the biggest early boost of all colleges that offer Restrictive Early Action—e.g. Stanford, Princeton, Yale, etc.—it was nevertheless very statistically insignificant. Princeton agrees: "Those who apply early gain no strategic advantage."

If you enjoyed this article but have never seen a holistic evaluation sheet used by admissions offices to understand how colleges will review and evaluate you when you apply, consider contacting us to learn how we can guide you in making smarter decisions that boost your odds of admittance and achieve smarter outcomes. 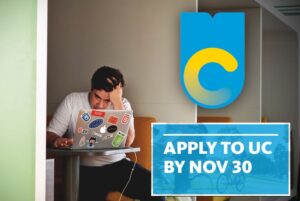 Preview: 1. Does the UC website actually crash on the deadline? 2. Is the UC application due on or...
Skip to content